Sale on canvas prints! Use code ABCXYZ at checkout for a special discount!

The Painting commemorates a 100 years since the first week of WW1. will be unveiled in Gateshead at 3:00PM on the afternoon of Friday the 8 th of August 2014 at the Old Town Hall Council Chambers Gateshead NE8 1HE, 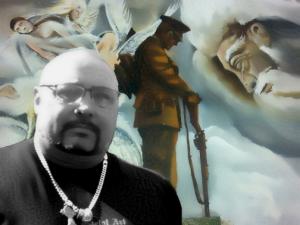 One way to understand why I had to create this painting you must firstly understand  the levels of violence and slaughter that occurred in the Great War..the total number of military and civilian casualties in World War One, was over 37 million, there were over 16 million deaths and 20 million wounded ranking it among the deadliest conflicts in human history.
Casualties and deaths just within the British Empire. Exact figures are still in dispute, because of different definitions used each category, the questionable accuracy of the recording system used and the loss or destruction of a number of official documents. The data  below reflect numbers from several sources and are consistent with most experts' current estimates.
Total mobilized forces Killed Wounded Missing Total Casualties
British Empire
8,904,467 908,371 2,090,212 191,652 3,190,235

The painting puts together different stories with different perspectives, so the observer can return time and time again to the painting, each time finding something new, and taking away there own interpretation of what they see.
This painting commemorates 100 years since The Great War WW1, respectfully portraying the acts of extreme bravery, bloody obscenity and consequences of War. The effect it had on modern times. A generation of innocent young men, their heads full of high abstractions like Honour, Glory and England, went off to war to make the world safe for democracy. They fought with the hearts of lions and won with honour & glory ,But they were slaughtered in their tens of thousands. Many of those who survived were shocked, disillusioned and embittered by their war experience many saw that their real enemies were not the Germans, but the politicians and arm chair generals , old men at home who some believe had mislead to them. They rejected the values of the society that had sent them to war, and in doing so separated their own generation from the past and from their cultural inheritance. Some say this was the beginning of the end of the British empire and the start of a brave but dangerous new world ,the world would never be the same again. As a Christian country. the painting is not only to be historically accurate, symbolic in its approach. The painting shows the constant battle between good and evil portrayed by God and the arch Angels Gabriel gathering a host of angels weeping as they collect the dead from the battle field under the watchful eye of death ,The exhilaration of Lucifer ecstatic at the misery and chaos he has caused in his quest to rule the hearts and minds of men. The mud and blood of the battle field, The comradeship of the daily trench life, but also the extreme acts of kindness shown by both sides towards their enemies. Acts of bravery in the face of overwhelming adversary. A focal point at which to remember and mourn comrades, fathers brother and kin rippling through the ages.
And In a German trench a young proud idealist Austrian painter as he in the half light,stares across no man's land, darkness whispering in his ear the seeds of an ideology so terrible that 20 year after the WW1 carnage he would once again plunge the world back into a truly war against evil and so it go's on.
To mark this event a limited number of signed prints are available to purchase on line.